A friend and colleague of mine (Matt) and I have an ongoing discussion about over-specced gear for our home networks. Our core routers have been FW-7540s running pfSense (Atom D525, 4GB RAM, 4 Intel NICs) since 2013. pfSense offers a huge advantage over commercial-grade routers – I run dual WAN with failover based on ping, link, and packet loss, have extremely customizable DNS and DHCP, and can set up an OpenVPN server in just a few minutes. Matt and I also recently have had 500Mbit+ downstream connections installed, so it’d be good to know what hardware and software combination is “for sure” capable of utilizing the full pipe.

There have been a series of excellent articles at Ars Technica this year by Jim Salter that constantly get mentioned in our discussions:

The first two initial articles were mildly interesting – we do plenty of Linux-based routing at the office, but I don’t really want to build a router from scratch at home if there is a distribution that works as well. The results in Jim’s latest Router rumble article with pfSense 2.3.1 and the homebrew Celeron J1900 were described as “tweaky” and didn’t seem to hold up against the homebrew variant running Linux. I found this a bit odd because FreeBSD is widely assumed to have a hardened, robust and performant network stack; the general impression amongst networking folks I’ve talked to that Linux isn’t quite as good for this use case.

Coming from 2.2, the 2.3 series of pfSense is not exactly everything I’m looking for. I had to ‘factory reset’ the unit shortly after the 2.2 to 2.3 upgrade to avoid firewall rules displaying errors in the web configuration UI. As a personal irritation, the development team also took out the RRD-style graphs and replaced them with a “Monitoring” page, which I am not a fan of. 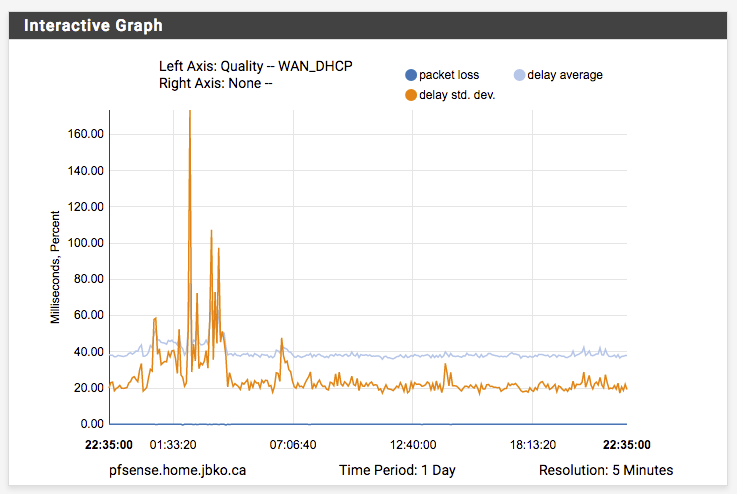 The Router rumble article, though, tested the UniFi Security Gateway but not the 3-port EdgeRouter Lite, which is my preferred option for users that need more capability than their ISP-provided modem/router combination. Jim did mention that they were both not up to routing gigabit from WAN to LAN, so I figured I’d see if I could replicate the results and if the ERL was any better than the USG.

Following the posts, I configured two machines to act as client and server. Both were booted to Ubuntu 16.04.1 live USB sticks and had ‘apt-get update; apt-get upgrade’ run before any tests were performed. I also had to run “rm -rf /var/lib/apt/lists” to get apt to start working.

Some additional changes from the Ars Technica article are more suitable for my configuration and testing. On Ubuntu 16.04, the command to install ab and nginx should be apt-get install apache2-utils nginx (the ‘ab’ package doesn’t exist.) I made the same configuration changes to /etc/nginx/nginx.conf, /etc/default/nginx and /etc/sysctl.conf as suggested in the article:

The testing script was modified to use a -s 20 parameter as indicated in the latest article, as well as sleeping for 10 and 20 seconds at appropriate times to distinguish each test run in the graphs:

I also generated ‘JPEG’ files with /dev/urandom and placed them in /var/www/html (default nginx directory):

Finally, installing netdata on the client needed a different set of dependencies (16.04 may have changed some of them):

After cloning the Git repository and running the suggested install steps, you may also need to edit /etc/netdata/netdata.conf and add the following sections (replacing enp5s0 with your network interface from ifconfig) in order to get the same graphs:

You can download the test runs in a ZIP file, which contains the ‘ab’ output from the tests. Note that some of the graphs show a larger separation between the ab runs with different filesizes; this was due to different ‘sleep’ values being tested in the script.

Many NICs support auto MDI-X, which allows a standard Ethernet cable to act like a crossover cable if both network cards support it. I ran a test with the server directly connected to the client and the graph appeared very cleanly.

With both systems connected to a Netgear GS108T switch, the graphs were fairly consistent with one unexplained valley in the 1MB/-c 100 test – but there were no failed requests to nginx noted in the ab results. This seemed to be a fluke; I wasn’t able to reproduce the problem in the exact same spot later. However, the valley did appear during other tests, lending suspicion that the GS108T may be causing a problem.

The ERL was flashed with 1.9.0 firmware and configured using the “Basic Setup” wizard, which sets configuration back to default values. The eth0 port acts as the WAN interface and provides NAT to the eth1 (LAN) interface. The wizard also configures some default firewall rules. I set up the WAN interface with a static IP of 192.168.99.2, and the laptop at 192.168.99.101 was plugged into eth0. The LAN interface (eth1) had an IP range of 192.168.1.1/24 and provided an IP via DHCP to the desktop. The resulting config.boot file is also available for inspection.

Unfortunately the scale and size of this image is slightly off from the direct switched test, but the peaks and dips in the graph should be sufficient to demonstrate the differences in performance. We can see that the 10KB test is particularly brutal on the EdgeRouter Lite, with speeds topping out at about 215Mbit/s. The 100KB test is slightly better in terms of bandwidth, with the lowest test result at 626.82Mbit, but the top of the graph is not smooth on each test. Finally, the ERL with this firmware pulls out a great performance on the 1MB test, with only the last 10K concurrency run showing a few dips in the graph; the lowest result from ab sits at 904.73Mbit.

These test runs raised some additional questions. For now, it convinced me to not immediately run out and get an EdgeRouter Pro, since according to these results, at 100KB to 1MB filesizes I’d still be able to utilize my full download bandwidth on an ERL. What I really need to do is pull my pfSense box out of line and run it through this test scenario to compare it directly to the EdgeRouter Lite and a direct connection.

Tweaking and Tuning the Test