At Puerto Abrigo, there was no sign or other indicator for Cozumel Charters (although the initial email, which I should have read more closely, said that it was “door two by the beer store”.) After looking confused for a minute or two, we met our crew who were in the process of prepping and loading the boat. They took the outstanding money, gave us a mug to commemorate the beginning of the journey, and then we were off to fish!

Over the course of the morning, we caught ten or twelve fish, most of them (generic) grouper and three of which were red snapper, which later make an appearance on our lunch tray. Weather conditions were good during the trip, the crew was very friendly and we were offered plenty of beer and water throughout. I was shocked at how close we got to both the Getaway and other cruise ships while on our journey – it’s hard to tell the exact distance, but you could definitely make out rivets and other small mechanical details on the larger ship. It’s hard to appreciate the scale of these mega-ships until you’re right beside them.

A deviation from the initial plan did occur; while the instructions said to go to Margaritaville and have our fish cooked there for lunch, the crew suggested a different location along the main road (Av. Rafael E. Melgar) called El Coctelito. I was a bit suspicious in that there may have been some type of kickback or other less-than-upfront reason for this diversion, but I didn’t see anything untoward – to be honest, after the fact it just seemed like it was closer to the dock.

We returned to the marina and selected our three red snapper. One of our crew members cleaned and filletted them, and put them in a plastic bag for us to take away. We were able to flag down a cab fairly easily just walking out to the road, and then arrived at the restaurant in only a few minutes ($7 US ride).

At El Coctelito, we let our waiter know we’d brought our own fish, and he returned fairly shortly and let us know that it’d be $8 US/person for the cook to prepare a platter with the three fish and some accompaniments. This seemed quite reasonable, so we ordered a couple drinks and sat back. And what a platter it was! 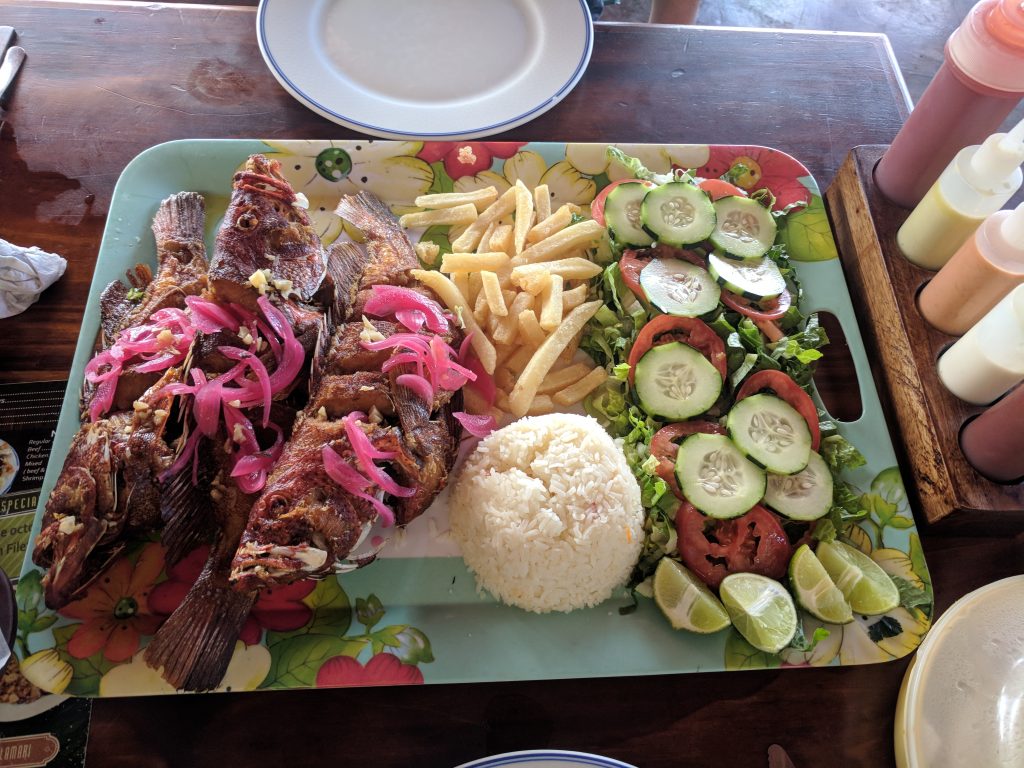 I don’t think I’ve had fish quite that fresh before. Avoiding some of the less edible parts (teeth, fins) was a bit difficult, but totally worth it. Not pictured above were the tortillas that were also included, so we were able to pick apart the red snapper and construct fish tacos fairly easily. The sauces to the right were also flavorful – none of them blisteringly hot, but they complimented the fish very well.

In terms of payment, the restaurant took both pesos and USD cash, as well as Visa. If you wanted to pay by credit card, they did the USD conversion first at a rate that I’m sure qualifies as usury, so my dearly discontinued Chase/Amazon.ca card (with no foreign conversion markup) was less useful here. We were easily able to walk back to the ship from the restaurant, which took about a half an hour at meandering speed.

Full of fish and back on board

I have an unusual number of notes from the evening of Cruise Day 6, so I’ll try and distill them into something of practical use for readers. The most important one seems to be that at about 4:15pm, the Sunset Mojito Bar and surrounding seating became unbearably warm due to the sun hitting it at just the right angle. I had to retire to O’Sheehan’s to continue making use of the Ultimate Beverage Package without getting crisped. During my time being a bar fly and badgering a group of people about their experiences at the steakhouse, I made several observations that I believe are worthy of sharing:

Returning my attention to the bar, the primary task for one of the staff members seemed to be consolidating liquor from multiple partially-filled bottles into one. For example, they’d remove the lid from one bottle, then put a “free-pour flow spout” on another and transfer its contents into the first bottle. While I’m all for efficiency, I couldn’t help but wonder if this practice was legitimate from a health code standpoint. Turns out, it’s called marrying bottles and is less of a health infraction than a criminal one – it violates US federal law under 27 CFR 31.201 and 26 US Code section 5301, upon penalty of up to $1000 and/or one year in prison. In the port of Miami, you’d also be subject to Florida Statute 565.11, which classifies it as a second-degree misdemeanor.

Now, technically, we were either in Mexican or international waters at the time, and I can’t be certain that I observed a federal crime worthy of a year’s prison sentence. Frankly I’d be a poor witness given that I’d probably consumed said liquor – or maybe that makes me better positioned to testify for the United States Attorney as a personally affected individual? Guess we’ll never know.

Potential legal and health issues aside, here are the relevant bar menus from the evening:

We ended up at the buffet for dinner this evening, likely due to the occupancy rates of all other restaurants. Most food was fine, but worth mentioning is a negative review of the unfortunately grainy blue cheese that Kayla ate: “It made my mouth unhappy very quickly.”

Continue to Part 7 – At Sea and Return to Miami